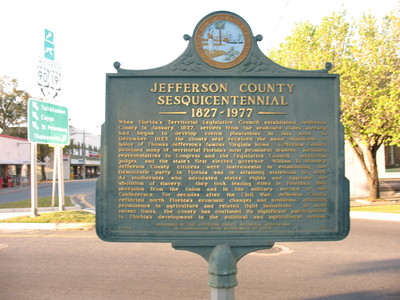 This marker is located on the courthouse lawn, in Monticello, Jefferson County, Florida.

" When Florida's Territorial Legislative Council established Jefferson County in January, 1827, settlers from the seaboard states already had begun to develop cotton plantations in this area. In December, 1827, the county seat received the name Monticello in honor of Thomas Jefferson's famous Virginia home. Jefferson County provided many of territorial Florida's most prominent leaders, including representatives to Congress and the Legislative Council, territorial judges, and the state's first elected governor, William D. Moseley. Jefferson County citizens were instrumental in establishing the Democratic party in Florida and in attaining statehood in 1845. As southerners who advocated states' rights and opposed the abolition of slavery, they took leading roles in Florida's 1861 secession from the Union and in the military service of the Confederacy. For decades after the Civil War, Jefferson County reflected north Florida's economic changes and problems, attaining prominence in agriculture and related light industries. In more recent times, the county has continued its significant participation in Florida's development in the political and agricultural arenas."

Sponsored by Jefferson County Historical Association in cooperation with Department of State.