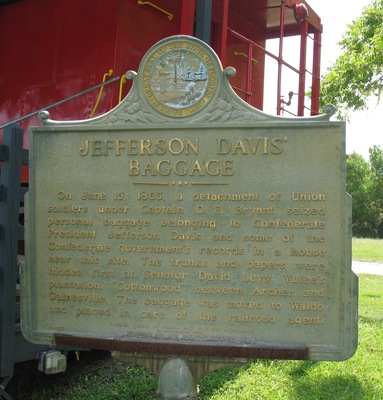 This two-sided marker describes Dickison and his men as well as Jefferson Davis' Baggage. It is located in a city park in front of a caboose in Waldo, FL.

"On June 15, 1865, a detachment of Union soldiers under Captain O. E. Bryant seized personal baggage belonging to Confederate President Jefferson Davis and some of the Confederate government's records in a house near this site. The trunks and papers were hidden first at Senator David Levy Yulee's plantation, "Cottonwood" between Archer and Gainesville. The baggage was moved to Waldo and placed in care of the railroad agent."

The "Dickison and His Men" marker reads:

"John Jackson Dickison (1816-1902), Florida's famous Civil War guerrilla leader bivouacked at Camp Baker south of here during the closing weeks of the conflict. Dickison and his men became legendary figures. As Company H, Second Florida Cavalry, they engaged in skirmishes, raids, battles, scouting expeditions, and forced marches from the time of organization at Flotard's Pond, Marion County, in 1862 until the force was mustered out at Waldo on May 20, 1865."