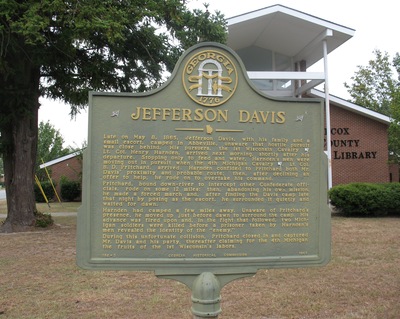 " Late on May 8, 1865, Jefferson Davis, with his family and a small escort, camped in Abbeville, unaware that hostile pursuit was close behind. His pursuers, the 1st Wisconsin Cavalry [Federal], Lt. Col. Henry Harnden, arrived next morning, shortly after his departure. Stopping only to feed and water, Harnden's men were moving out in pursuit when the 4th Michigan Cavalry [Federal], Lt. Col. B. D. Pritchard, arrived. Harnden confided to Pritchard both Mr. Davis' proximity and probable route; then, after declining an offer of help, he rode on to overtake his command. Pritchard, bound down-river to intercept other Confederate officials, rode on some 12 miles: then, abandoning his own mission, he made a forced march and, after finding the Davis camp late that night by posing as the escort, he surrounded it quietly and waited for dawn.

Harnden had camped a few miles away. Unaware of Pritchard's presence, he moved up just before dawn to surround the camp. His advance was fired upon and, in the fight that followed, two Michigan soldiers were killed before a prisoner taken by Harnden's men revealed the Identity of the "enemy".

During this unfortunate collision, Pritchard closed in and captured Mr. Davis and his party, thereafter claiming for the 4th Michigan the fruits of the 1st Wisconsin's labors."