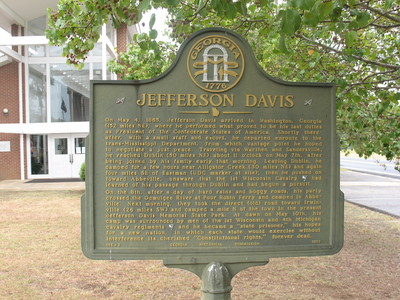 The marker text reads as follows :

" On May 4, 1865, Jefferson Davis arrived in Washington, Georgia (178 miles NE of the Park), where he performed his last duties as President of the Confederate States of America. Shortly thereafter, with a small staff and escort, he departed enroute to the trans-Mississippi Department where, from which vantage point he hoped to negotiate a just peace. Traveling via Warrenton and Sandersville, he reached Dublin (50 mile NE) about 11 o`clock May 7th, after being joined by his family early that morning. Leaving Dublin, he camped for a few hours near Alligator Creek (30 miles NE) and again four miles SE of Eastman (UDC marker at site), then he pushed on toward Abbeville, unaware that the 1st Wisconsin Cavalry (USA) had learned of his passage through Dublin and had begun a pursuit.

On the 8th, after a day of hard rains and boggy roads, his party crossed the Ocmulgee River at Poor Robin Ferry and camped in Abbeville (26 miles SW) and camped a mile N of the town in the present Jefferson Davis Memorial State Park. At dawn on May 10th, his camp was surrounded by men of the 1st Wisconsin and 4th Michigan cavalry regiments (USA) and he became a `state prisoner`, his hopes for a new nation -- in which each state would exercise without interference its cherished `Constitutional Rights` -- forever dead."