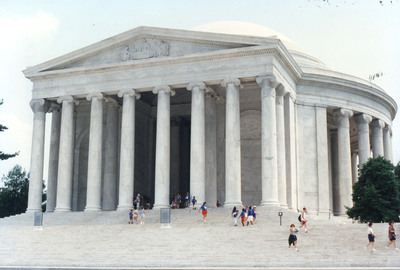 Jefferson Memorial, Washington DC. The Jefferson Memorial stands adjacent to the US National Mall in the nation’s capital—directly south of the Washington Monument. During the Great Depression, John Russell Pope designed the monument with a neo-classical cupola. Pope, however, died before actual construction began, leaving architects Otto Eggers and Daniel Higgins to supervise building of the Jefferson Memorial. Rudolph Evans sculpted the statue of Jefferson, and the memorial received its dedication in 1943.

The memorial honors third president of the United States, Thomas Jefferson, one of America’s Founding Fathers as well as the drafter of the Declaration of Independence and adviser to the Constitution.

As one of the most popular attractions in Washington, DC, the monument hosts many events, including the beloved annual Cherry Blossom Festival.