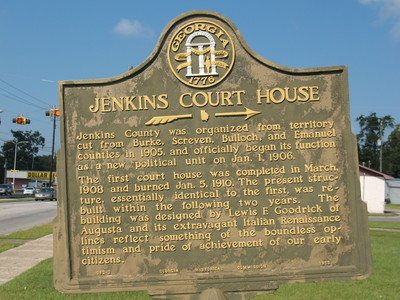 " Jenkins County was organized from territory cut from Burke, Screven, Bulloch, and Emanuel counties in 1905, and officially began its function as a new political unit on Jan. 1, 1906.

The first court house was completed in March, 1908 and burned Jan. 5, 1910. The present structure, essentially identical to the first, was rebuilt within the following two years. The building was designed by Lewis F. Goodrick of Augusta and its extravagant Italian Renaissance lines reflect something of the boundless optimism and pride of achievement of our early citizens. "