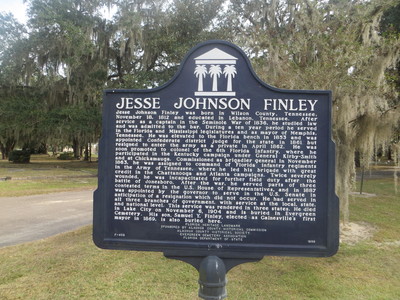 "Jesse Johnson Finley was born in Wilson County, Tennessee, November 18, 1812 and educated in Lebanon, Tennessee. After service as a captain in the Seminole War of 1836, he studied law and was admitted to the bar. During a ten year period he served in the Florida and Mississippi legislatures and as mayor of Memphis, Tennessee. He was elevated to the Florida bench in 1853 and was appointed Confederate district judge for the state in 1861 but soon promoted to colonel of the 6th Florida Infantry, where he participated in the Kentucky campaign under General Kirby-Smith and at Chickamauga. Commissioned as brigadier general in November 1863, he was assigned to command of Florida infantry regiments in the Army of Tennessee, where he led his brigade with great credit in the Chattanooga and Atlanta campaigns. Twice severely wounded, he was incapacitated for further field duty after the battle of Jonesboro. After the war, he served parts of three contested terms in the U.S. House of Representatives, and in 1887 was appointed by the governor to serve in the U.S. Senate in anticipation of a resignation which did not occur. He had served in all three branches of government, with service at the local, state, and national level. This service was rendered in three states. He dies in Lake City on November 6, 1904 and is buried in Evergreen Cemetery. His son, Samuel Y. Finley, elected as Gainesville's first mayor in 1869, is also buried here."