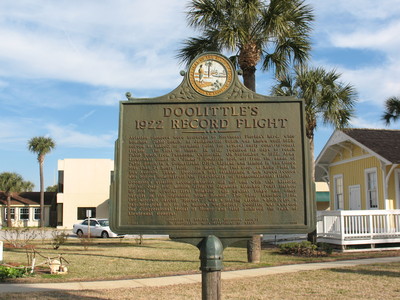 This marker is located on Beach Blvd about 3 blocks from the ocean. There is a small historical park also located there with a old train, a church and several old buildings. A great place to visit and to spend a few hours.

" Florida´s mild climate made it attractive to aviation pioneers. This area, known until 1925 as Pablo Beach, served as takeoff or terminal point for several early coast-to-coast flights, the first of which occurred in 1912 and required 115 days to reach Pablo Beach from Pasadena, California. On September 4, 1922, Army Lieutenant James H. ("Jimmy") Doolittle piloted a DeHavilland DH-4 biplane from Pablo Beach to San Diego in an elapsed time of 22 hours and 35 minutes. He made one stop during his flight for fuel, at Kelly Field in San Antonio, Texas. Doolittle´s feat established a new speed record and helped demonstrate the practicality of transcontinental flight. Jimmy Doolittle remained active in aviation. During World War II, he led the first American bombing raid against the Japanese home islands, a daring stroke which provided a psychological lift to the nation´s war effort. "