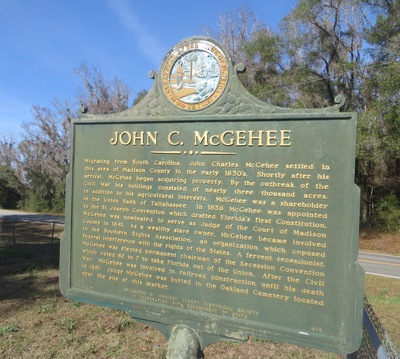 John C. McGehee was the Chairman of the Succession Commission that voted to take Florida out of the Union.

" Migrating from South Carolina, John Charles McGehee settled in this area of Madison County in the early 1830's. Shortly after his arrival, McGehee began acquiring property. By the outbreak of the Civil War his holdings consisted of nearly three thousand acres. In addition to his agricultural interests, McGehee was a shareholder in the Union Bank of Tallahassee. In 1838 McGehee was appointed to the St. Joseph Convention which drafted Florida's first Constitution. McGehee was nominated to serve as Judge of the Court of Madison County in 1841. As a wealthy slave owner, McGehee became involved in the Southern Rights Association, an organization which opposed federal interference with the rights of the States. A fervent secessionist, McGehee was elected permanent chairman of the Secession Convention which voted 62 to 7 to take Florida out of the Union. After the Civil War, McGehee was involved in railroad construction until his death in 1881. Judge McGehee was buried in the Oakland Cemetery located near the site of this marker."

Sponsored or placed by: Madison County Historical Society in cooperation with Department of State.