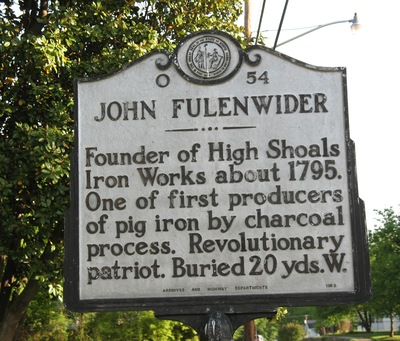 John Fulenwider, iron manufacturer and Revolutionary War soldier, was born in Switzerland in 1756. His parents, Jacob and Ester, immigrated to America in the 1760s, settling in Rowan County.

After the Revolution, Fulenwider moved to Lincoln County and began an iron manufactory. Fulenwider’s most important foundry was located at High Shoals. His works produced nails, farm implements, bar iron, and wagon wheels. Fulenwider developed one of the earliest methods of making pig iron with the charcoal process. During the War of 1812, his High Shoals ironworks produced cannon balls for use by the American army. The ironworks he developed remained in operation until 1875.