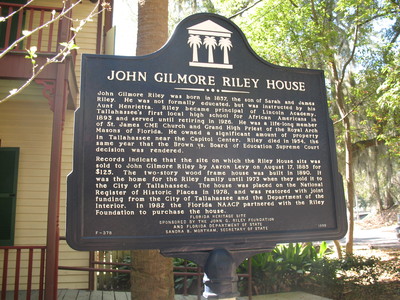 This is located on 419 E Jefferson St in Tallahassee, Florida.

" John Gilmore Riley was born in 1857, the son of Sarah and James Riley. He was not formally educated, but was instructed by his Aunt Henrietta. Riley became principal of Lincoln Academy, Tallahassee’s first local high school for African Americans in 1893 and served until retiring in 1926. He was a life-long member of St. James CME Church and Grand High Priest of the Royal Arch Masons of Florida. He owned a significant amount of property in Tallahassee near the Capitol Center. Riley died in 1954, the same year that the Brown vs. Board of Education Supreme Court decision was rendered. Records indicate that the site on which the Riley House sits was sold to John Gilmore Riley by Aaron Levy on August 17, 1885 for $125. The two-story wood fame house was built in 1890. It was the home for the Riley family until 1973 when they sold it to the City of Tallahassee. The house was placed on t he National Register of Historic Places in 1978, and was restored with joint funding from the City of Tallahassee and the Department of the Interior. In 1982 the Florida NAACP partnered with the Riley Foundation to purchase the house."

Sponsors: THE JOHN G. RILEY FOUNDATION AND THE FLORIDA DEPARTMENT OF STATE