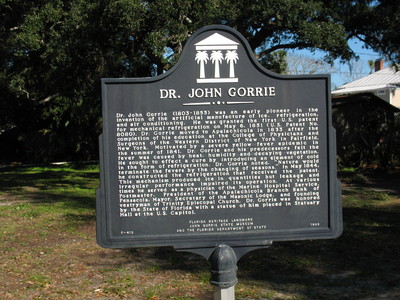 A 30-year-old physician from South Carolina, Dr. John Gorrie arrived in Apalachicola in 1833. He was the pioneer in the invention of refrigeration , air conditioning, and artificial manufacture of ice.

" Dr. John Gorrie (1803-1855) was an early pioneer in the invention of the artificial manufacture of ice, refrigeration, and air conditioning. He was granted the first U.S. patent for mechanical refrigeration on May 6, 1851 (U.S. Patent # 8080). Dr. Gorrie moved to Apalachicola in 1833 after the completion of his education at the College of Physicians and Surgeons of the Western District of New York in Fairfield, New York. Motivated by a severe yellow fever epidemic in the summer of 1841, Dr. Gorrie and his predecessors felt the fever was caused by heat, humidity and decaying vegetation. He sought to effect a cure by introducing an element of cold in the form of refrigeration. Dr. Gorrie noted, “Nature would terminate the fevers by the changing of seasons.” In May 1844, he constructed the refrigeration that received the patent. This mechanism produced ice in quantities but leakage and irregular performance impaired its operation. At various times he served as a physician of the Marine Hospital Service, Postmaster, President of the Apalachicola Branch Bank of Pensacola, Mayor, Secretary of the Masonic Lodge, and founding vestryman of Trinity Episcopal Church. Dr. Gorrie was honored by the State of Florida with a statue of him placed in Statuary Hall at the U.S. Capitol."