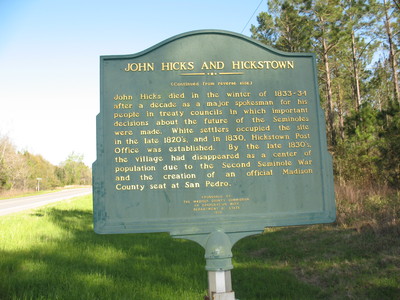 " John Hicks died in the winter of 1833-34 after a decade as a major spokesman for his people in treaty councils in which important decisions about the future of the Seminoles were made. White settlers occupied the site in the late 1820's, and in 1830, Hickstown Post Office was established. By the late 1830's, the village had disappeared as a center of population due to the Second Seminole War and the creation of an official Madison County seat at San Pedro."

Sponsored or placed by: The Madison County Commission In Cooperation With Department of State