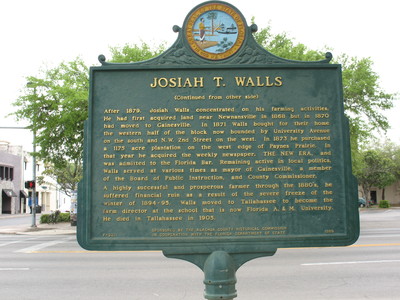 " Born in 1842 to slave parents in Winchester, Va., little is known of Josiah T. Walls' early life. After a short term of Confederate service, he enlisted in the Third Regiment, U.S. Colored Troops in 1863. Transferred to Picolata on the St. Johns River in 1864, he married Helen Ferguson of Newnansville and in 1865 moved to Alachua County after he was mustered out. After passage of the U.S. Military Reconstruction Act of 1867, Walls entered into Florida politics; as a delegate to the 1868 State constitutional convention, followed by election as a State representative and later senator from Alachua County. The 1870 nominee of the Republican Party for Florida's only seat in the U.S. House of Representatives, Walls defeated Silas Niblack after a bitter contest, riddled with charges of fraud and intimidation. Josiah T. Walls thus became the State's first black congressman. Although unseated by the House near the end of his term, Walls was re-elected in 1872. In another contested election in 1874, Walls defeated J.J. Finley, a former Confederate General, but, in 1876, was again removed from office. Walls was elected to the Florida Senate that year."