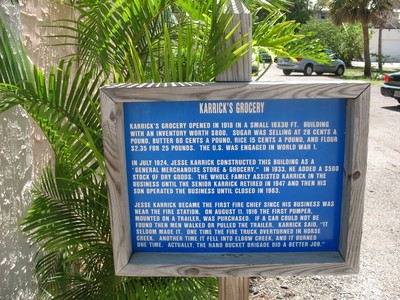 The Karrick Building is a historic U.S. building located at 1490 Highland Avenue, Eau Gallie, Florida. The building was constructed in 1924 by Jesse Karrick and it was used as a general merchandise and grocery store until 1963. Jesse Karrick was the first proprietor of the store and also served as the first fire chief of Eau Gallie.

In July 1924, Jesse Karrick constructed this building as a "General Merchandise Store & Grocery". In 1933, he added a $500 stock of dry goods. The whole family assisted Karrick in the business until the senior Karrick retired in 1947 and then his son operated the business until closed in 1963.

Jesse Karrick became the first fire chief since his business was near the fire station. On August 11, 1916 the first pumper, mounted on a trailer, was purchased. If a car could not be found then men walked or pulled the trailer. Karrick said, "It seldom made it. One time the fire truck overturned in horse creek. Another time it fell into elbow creek, and it burned one time. Actually, the hand bucket brigade did a better job".