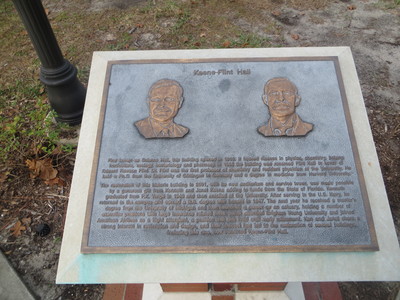 Dr. Edward R. Flint was the University of Florida's professor of chemistry from 1905 to 1919. Flint Hall was renamed Flint Hall in his honor in the late 1950's. Kenneth Keene's relationship began when he was in High School. He graduated from P K Yonge and started college. He and his wife Janet created a fellowship for Graduate Study, and made a big gift in 1997, with which renovations were done. Flint Hall was renamed Keene-Flint Hall. It was added to the National Register of Historic Places in 1979.

The text on the plaque reads as :

" First known as Science Hall, this building opened in 1910. It housed classes in physics, chemistry, botany, horticulture, zoology, bacteriology and pharmacy. In 1955 the building was renamed Flint Hall in honor of Edward Rawson Flint. Dr. Flint was the first professor of chemistry and resident physician at the University. He held a Ph.D. from the University of Gottingen in Germany and a degree in medicine from Harvard University.

The restoration of this historic building in 2001, with its new auditorium and service tower, was made possible by a generous gift from Kenneth and Janet Keene adding to funds from the State of Florida. Kenneth graduated from P.K. Yonge in 1943 and then enrolled at the University. After serving in the U.S. Navy, he returned to the campus and earned a B.S. degree with honors in 1947. The next year he received a master's degree from the University of Michigan and then launched a career as an actuary, holding a number of executive positions with large insurance related firms. Janet attended Brigham Young University and joined American Airlines as a flight attendant, a position that she held until early retirement. Ken and Janet share a strong interest in restoration and design, and their interest has led to the restoration of several buildings, including this one, now renamed Keene-Flint Hall."