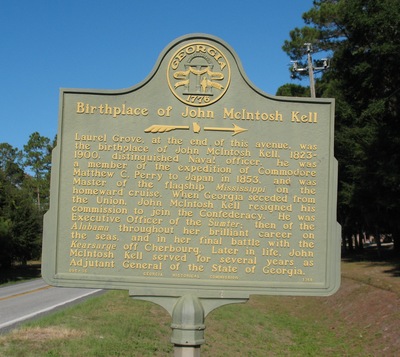 This is located near Fort King George, Darien ,in McIntosh County, Georgia.

" Laurel Grove, at the end of this avenue, was the birthplace of John McIntosh Kell, 1823-1900, distinguished Naval officer. He was a member of the expedition of Commodore Matthew C. Perry to Japan in 1853, and was Master of the flagship Mississippi on the homeward cruise. When Georgia seceded from the Union, John McIntosh Kell resigned his commission to join the Confederacy. He was Executive Officer of the Sumter; then of the Alabama throughout her brilliant career on the seas, and in her final battle with the Kearsarge off Cherbourg. Later in life, John McIntosh Kell served for several years as Adjutant General of the State of Georgia."