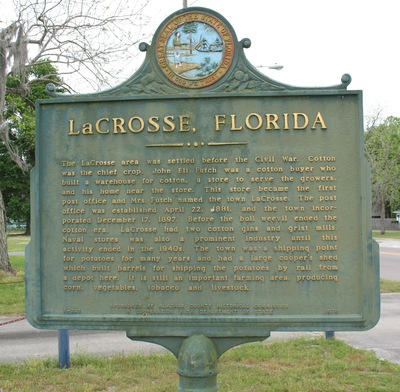 " The LaCrosse area was settled before the Civil War. Cotton was the chief crop. John Eli Futch was a cotton buyer who built a warehouse for cotton, a store to serve the growers, and his home near the store. This store became the first post office and Mrs. Futch named the town LaCrosse. The post office was established April 22, 1881, and the town incorporated December 17, 1897. Before the boll weevil ended the cotton era, LaCrosse had two cotton gins and grist mills. Naval stores was also a prominent industry until this activity ended in the 1940s. The town was a shipping point for potatoes for many years and had a large cooper´s shed which built barrels for shipping the potatoes by rail from a depot here. It is still an important farming area, producing corn, vegetables, tobacco and livestock. "