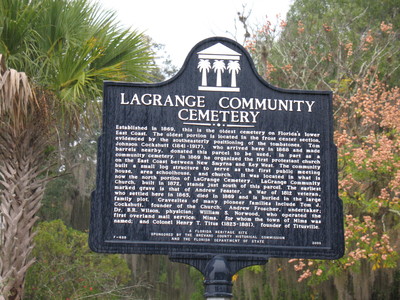 This marker is located on the North Dixie Highway in Brevard County. Established in 1869 this is the oldest cemetery on the East coast of Florida. It contains the graves of many pioneer families, as well as Colonel Titus.

" Established in 1869, this is the oldest cemetery on Florida’s lower East Coast. The oldest portion is located in the front center section, evidenced by the southeasterly positioning of the tombstones. Tom Johnson Cockshutt (1841-1917), who arrived here in 1868 and made barrels nearby, donated this parcel to be used, in part as a community cemetery. In 1869 he organized the first protestant church on the East Coast between New Smyrna and Key West. The community built a small log structure to serve as the first public meeting house, area schoolhouse, and church. It was located in what is now the north portion of LaGrange Cemetery. LaGrange Community Church, built in 1872, stands just south of this parcel. The earliest marked grave is that of Andrew Fenster, a War of 1812 veteran, who settled here in 1865, died in 1869 and is buried in the large family plot. Gravesites of many pioneer families include Tom J. Cockshutt, founder of the Church; Andrew Froscher, undertaker; Dr. B.R. Wilson, physician; William S. Norwood, who operated the first overland mail service; Mims, for whom the town of Mims was named; and Colonel Henry T. Titus (1823-1881), founder of Titusville."

Sponsors: BY THE BREVARD COUNTY HISTORICAL COMMISSION AND THE FLORIDA DEPARTMENT OF STATE