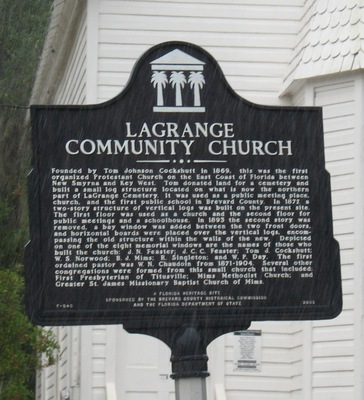 This marker is located on Old Dixie Highway north of Titusville. This was the first Protestant Church on the East Coast of Florida.

" Founded by Tom Johnson Cockshutt in 1869, this was the first organized Protestant Church on the East Coast of Florida between New Smyrna and Key West. Tom donated land for a cemetery and built a small log structure located on what is now the northern part of LaGrange Cemetery. It was used as a public meeting place, church, and the first public school in Brevard County. IN 1872 a two-story structure of vertical logs was built on the present site. The first floor was used as a church and the second floor for public meetings and a schoolhouse. IN 1893 the second story was removed, a bay window was added between the two front doors, and horizontal boards were placed over the vertical logs, encompassing the old structure within the walls of the new. Depicted on one of the eight memorial windows are the names of those who built the church, J. N. Feaster; J. C. C. Feaster; Tom J. Cockshutt; W. S. Norwood; B. J. Mims; R. Singleton; and W. P. Day. The first ordained pastor was W. N. Chaudoin from 1871-1904. Several other congregations were formed from this small church that included: First Presbyterian of Titusville: Mims Methodist Church: and Greater St. James Missionary Baptist Church of Mims."