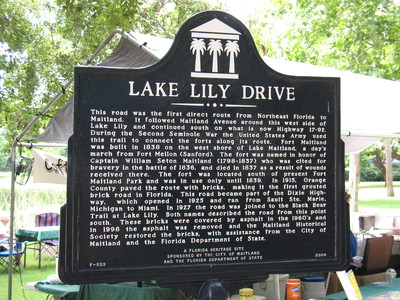 This marker is located on the Lake Lily Drive in Maitland, Florida.

" This road was the first direct route from Northeast Florida to Maitland. It followed Maitland Avenue around this west side of Lake Lily and continued south on what is now Highway 17-92. During the Second Seminole War the United States Army used this trail to connect the forts along its route. Fort Maitland was built in 1838 on the west shore of Lake Maitland, a days march from Fort Mellon (Sanford). The fort was named in honor of Captain William Seton Maitland (1798-1837) who was cited for bravery in battle of 1836, and died in 1837 as a result of wounds received there. The fort was located south of the present Fort Maitland Park and was in use only until 1839. In 1915, Orange County paved the route with bricks, making it the first grouted brick road in Florida. This road became part of the Dixie Highway, which opened in 1925 and ran from Sault Ste. Marie, Michigan to Miami. In 1927 the road was joined to the Black Bear Trail at Lake Lily. Both names described the road from this point south. These bricks were covered by asphalt in the 1960s and in 1998 the asphalt was removed and the Maitland Historical Society restored the bricks, with assistance from the City of Maitland and the Florida Department of State."

Sponsors: the City of Maitland and the Florida Department of State