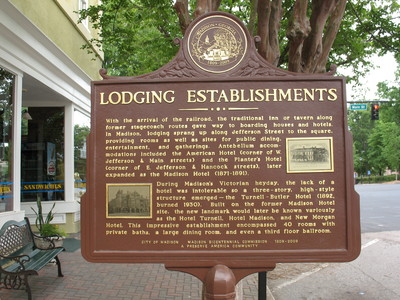 " With the arrival of the railroad, the traditional inn or tavern along former stagecoach routes gave way to boarding houses and hotels. In Madison, lodging sprang up along Jefferson Street to the square, providing rooms as well as sites for public dining, entertainment, and gatherings. Antebellum accommodations included the American Hotel (corner of W. Jefferson & Main streets) and the Planter’s Hotel (corner of E. Jefferson & Hancock streets), later expanded as the Madison Hotel (1871-1891). During Madison's Victorian heyday, the lack of a hotel was intolerable so a three-story, high style structure emerge - the Turnell - Butler Hotel (1892, burned 1930). Built on the former Madison Hotel site, the new landmark would later be known variously as the hotel Turnell, Hotel Madison, and the new Morgan Hotel. This impressive establishment encompassed 40 rooms with private baths, a large dining room, and even a third-floor ballroom.