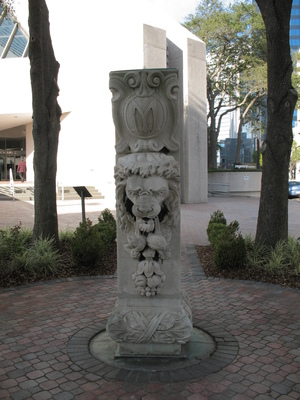 This Lion Column is a remnant of the McConihe /Drew Building, placed on the corner of West Bay and Main Streets. The McConihe Building was designed by J. H. W. Hawkins and was constructed in the middle of this block on Bay Street one year after the 1901 Fire. It was a landmark of which a city could be proud of. Its original owner, former mayor Luther McConihe, sold it in 1921 to the H. & W. B. Drew Company. In 1971 when this building was demolished Jacob F. Bryan II rescued 2 cast -stone ornaments featuring lion's heads and the monogram "M" (for McConihe) These were made into a freestanding column.