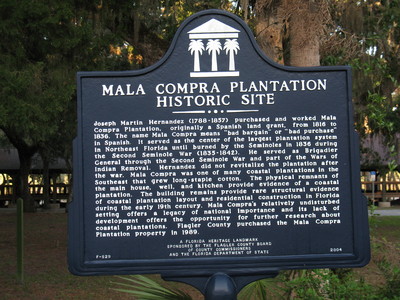 This marker is located on the Bing's landing on Route A1A, in Flagler County.

" Joseph Martin Hernandez (1788-1857) purchased and worked Mala Compra Plantation, originally a Spanish land grant, from 1816 to 1836. The name Mala Compra means “bad bargain” or “bad purchase” in Spanish. It served as the center of the largest plantation system in Northeast Florida until burned by the Seminoles in 1836 during the Second Seminole War (1835-1842). He served as Brigadier General through the Second Seminole War and part of the Wars of Indian Removal. Hernandez did not revitalize the plantation after the war. Mala Compra was one of many coastal plantations in the Southeast that grew long-staple cotton. The physical remnants of the main house, well, and kitchen provide evidence of a coastal plantation. The building remains provide rare structural evidence of coastal plantation layout and residential construction in Florida during the early 19th century. Mala Compra’s relatively undisturbed setting offers a legacy of national importance and its lack of development offers the opportunity for further research about coastal plantations. Flagler County purchased the Mala Compra Plantation property in 1989."

Sponsors: FLAGLER COUNTY BOARD OF COUNTY COMMISSIONERS AND THE FLORIDA DEPARTMENT OF STATE