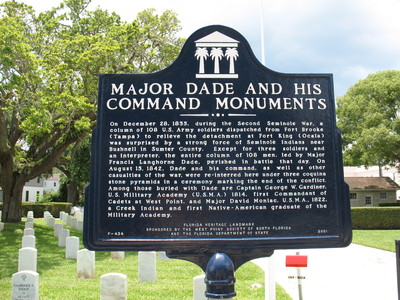 This marker is located at the St. Augustine National Cemetery, in St Augustine, Florida.

" On December 28, 1835, during the Second Seminole War, a column of 108 U.S. Army soldiers dispatched from Fort Brooke (Tampa) to relieve the detachment at Fort King (Ocala) was surprised by a strong force of Seminole Indians near Bushnell in Sumter County. Except for three soldiers and an interpreter, the entire column of 108 men, led by Major Francis Langhorne Dade, perished in battle that day. On August 15, 1842, Dade and his command, as well as other casualties of the war, were re-interred here under three coquina stone pyramids in a ceremony marking the end of the conflict. Among those buried with Dade are Captain George W. Gardiner, U.S. Military Academy (U.S.M.A.) 1814, first Commandant of Cadets at West Point, and Major David Moniac, U.S.M.A., 1822, a Creek Indian and first Native-American graduate of the Military Academy."

Sponsors: THE WEST POINT SOCIETY OF NORTH FLORIDA AND THE FLORIDA DEPARTMENT OF STATE