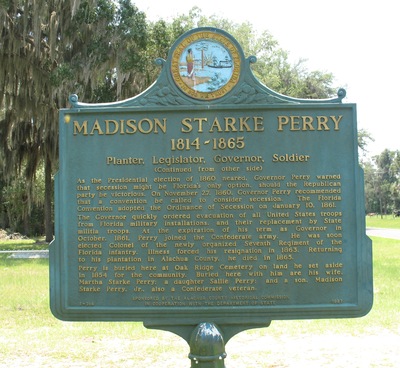 Continued as ..... " As the Presidential election of 1860 neared, Governor Perry warned that secession might be Florida's only option, should the Republican party be victorious. On November 27, 1860, Governor Perry recommended that a convention by called to consider secession. The Florida Convention adopted he Ordinance of Secession on January 10, 1861. The Governor quickly ordered evacuation of all United States troops from Florida military installations, and their replacement by State militia troops. At the expiration of his term as Governor in October, 1861, Perry joined the Confederate army. He was soon elected Colonel of the newly organized Seventh Regiment of the Florida infantry. Illness forced his resignation in 1863. Returning to his plantation in Alachua County, he died in 1865. Perry is buried here at Oak Ridge Cemetery on land he set aside in 1854 for the community. Buried here with him are his wife, Martha Starke Perry; a daughter Sallie Perry; and a son, Madison Starke Perry, Jr., also a Confederate veteran."

Erected by The Alachua County Historical Commission in Cooperation with the Department of State in 1987.