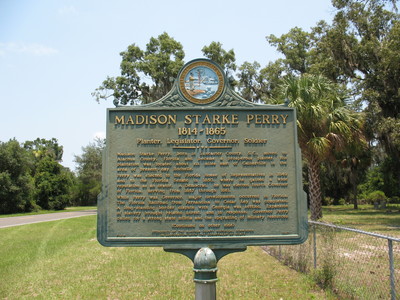 " Madison Starke Perry, born in Lancaster County, S.C., moved to Alachua County, Florida and became a prosperous planter. His plantation was located about six miles east of Gainesville in the area of present-day Rochelle. Perry was elected to the Florida House of Representatives in 1849 and to the Florida Senate in 1850, where he gained a wide reputation as an orator. A Democrat, he was elected fourth Governor of Florida, serving from 1857 through 1861. While Perry was Governor, major developments occurred in Florida. The Florida Railroad from Fernandina to Cedar Key was completed. A long-standing border dispute with Georgia was settled. Expansion of slavery brought related unrest, and in response, Governor Perry called for a strong state militia and the upgrading of military resources."

Erected by The Alachua County Historical Commission in Cooperation with the Department of State in 1987.