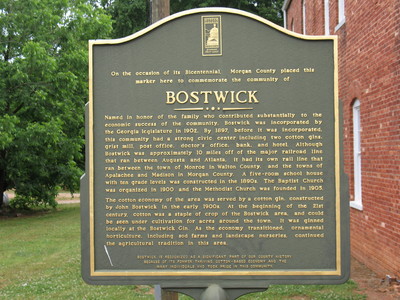 Town Bostwick Marker , GA. This marker is located on the lot next to the vacant Susie Agnes Hotel in downtown Bostwick.

On the occasion of its Bicentennial, Morgan County placed this marker here to commemorate the community of BOSTWICK

Name in honor of the family who contributed substantially to the economic success of the community, Bostwick was incorporated by the Georgia legislature in 1902. By 1897, before it was incorporated, this community had a strong civic center including two cotton gins, grist mill, post office, doctor’s office, bank, and hotel. Although Bostwick was approximately 10 miles off of the major railroad line that ran between Augusta and Atlanta, it had its own rail line that ran between the town of Monroe in Walton County, and the towns of Apalachee and Madison in Morgan County. A five-room school house with ten grade levels was constructed in the 1890s. The Baptist Church was organized in 1900 and the Methodist Church as founded in 1905.

The cotton economy of the area was served by a cotton gin, constructed by John Bostwick in the early 1800s. At the beginning of the 21st century, cotton was a staple of [sic] crop of the Bostwick area, and could be seen under cultivation for acres around the town. It was ginned locally at the Bostwick Gin. As the economy transitioned, ornamental horticulture, including sod farms and landscape nurseries, continued the agricultural tradition in this area.

BOSTWICK is recognised as a significant part of our country history because of its former thriving cotton-based economy and the many individuals who took pride in this community.