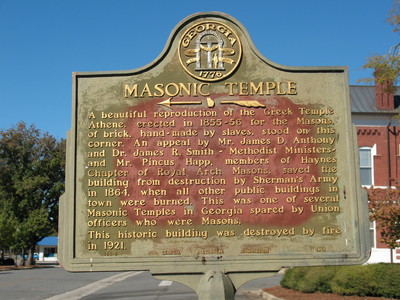 This marker is located opposite the Courthouse Square in Sanderville, Florida.

" A beautiful reproduction of the Greek Temple Athene, erected in 1855-56 for the Masons, of brick, hand-made by slaves, stood on this corner. An appeal by Mr. James D. Anthony and Dr. James R. Smith ~ Methodist Ministers ~ and Mr. Pincus Happ, Members of Haynes Chapter of Royal Arch Masons, saved the building from destruction by Sherman´s Army in 1864, when all over other public buildings in the town were burned. This was one of several Masonic Temples in Georgia spared by Union officers who were Masons.

This historic building was destroyed by fire in 1921."