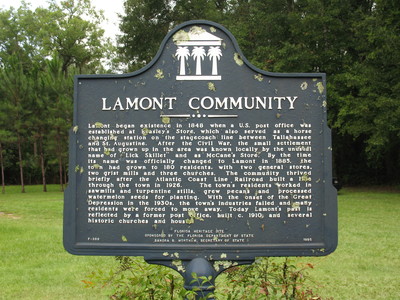 This marker is located on the lot east of the post office, on US 27, in Lamont, Florida.

" Originally called Beasley´s Store, Lamont was founded in 1848 as the site of a post office and stagecoach station on the Tallahassee to St. Augustine road. The settlement was called "Lick Skillet" after the Civil War, but in 1885 was named Lamont to honor Cornelius Lamont, Vice President during the first administration of President Grover Cleveland (1885-1889). The community thrived after the Atlantic Coast Line Railroad built a line through the town in 1926. Sawmills, turpentine stills, pecan growing and processing watermelon seeds for planting provided employment for the town´s residents. Today Lamont´s past is reflected by a former post office, built c. 1910, and several historic churches and houses."