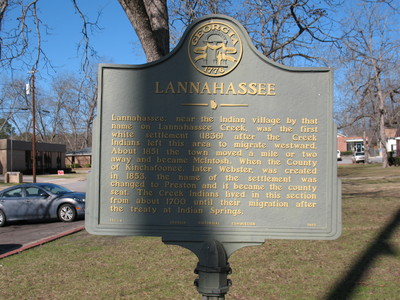 This marker is located in the Webster County Courthouse, in Preston, Georgia.

" Lannahassee, near the Indian village by that name on Lannahassee Creek, was the first white settlement (1836) after the Creek Indians left the area to migrate westward. About 1851 the town moved a mile or two away and became McIntosh. When the County of Kinchafoonee, later Webster, was created in 1853, the name of the settlement was changed to Preston and it became the county seat. The Creek Indians lived in this section from about 1700 until their migration after the treaty at Indian Springs."