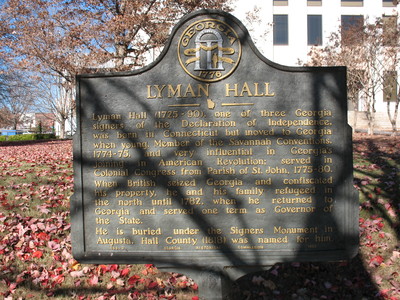 Lyman Hall Historic Marker located at the courthouse square in Gainesville. Lyman Hall was one of three Georgia signers of the Declaration of Independence.

" Lyman Hall (1725-90), one of three Georgia signers of the Declaration of Independence, was born in Connecticut but moved to Georgia when young. Member of the Savannah Conventions, 1774-75, and very influential in Georgia's joining in American Revolution; served in Colonial Congress from Parish of St. John, 1755-80. When British seized Georgia and confiscated his property, he and his family refugeed in the north until 1782, when he returned to Georgia and served one term as Governor of the State.

He is buried under the Signers Monument in Augusta. Hall County (1818) was named for him."