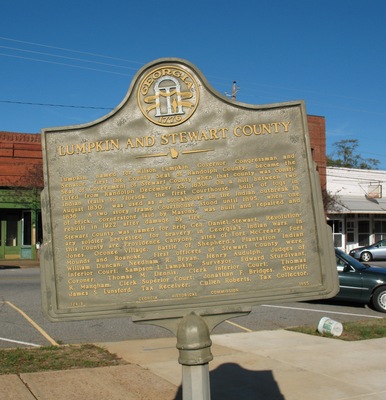 This marker is located on the Stewart County Courthouse, in Lumpkin, Georgia.

Lumpkin, named for Wilson Lumpkin, Governor, Congressman and Senator, first the County Seat of Randolph County, became the Seat of Government of Stewart County when that county was consti-tuted from Randolph December 23, 1830. On a hill between two Indian trails to Florida, the first Courthouse, built of logs in August 1830, was used as a blockhouse in the Indian outbreak in 1.A two story frame Courthouse stood until 1895, when one of brick, cornerstone laid by Masons, was built and repaired and rebuilt in 1922 after damage by fire. Stewart County was named for Brig. Gen. Daniel Stewart, Revolution-ary soldier brevetted for bravery in Georgia’s Indian Wars. In this County are Providence Canyons, sites of fort McCreary, Fort Jones, Oconee Village, Battle of Shepherd’s Plantation Indian Mounds and Roanoke.