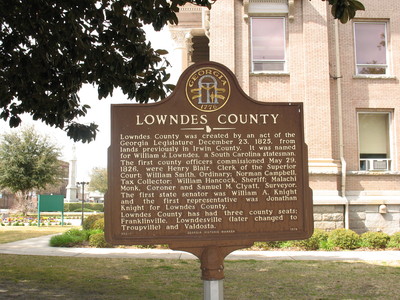 This marker is located in the Lowndes County Courthouse, Valdosta . The text on the marker reads as ;

Lowndes County was created by an act of the Georgia legislature December 23, 1825, from lands previously in Irwin County. It was named for William J. Lowndes, a South Carolina statesman.

The first state senator was William A. Knight and the first representative was Jonathan Knight for Lowndes County.