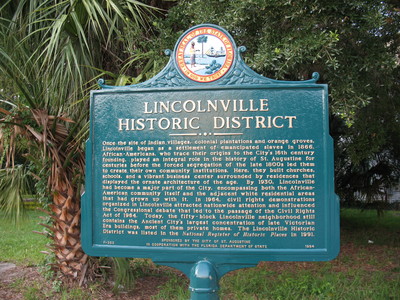 This is located at the intersection of MLK Ave & Bridge Street, In St Augustine, Florida.

" Once the site of Indian Villages, colonial plantations and orange groves, Lincolnville began as a settlement of emancipated slaves in 1866. African-Americans, who trace their origins to the City’s 16th century founding, played an integral role in the history of St. Augustine for centuries before the forced segregation of the late 1800s led them to create their own community institutions. Here, they built churches, schools, and a vibrant business center surrounded by residences that displayed the ornate architecture of the age. By 1930, Lincolnville had become a major part of the City, encompassing both the African-American community itself and the adjacent white residential areas that had grown up with it. In 1964, civil rights demonstrations organized in Lincolnville attracted attention and influenced Congressional debated that led to the passage of the Civil Rights Act of 1964. Today, the fifty-block Lincolnville neighborhood still contains the Ancient City’s largest concentration of late Victorian Era buildings, most of them private homes. The Lincolnville Historic District was listed in the National Register of Historic Places in 1991."

Sponsors: Sponsored by the City of St. Augustine and the Florida Department of State.