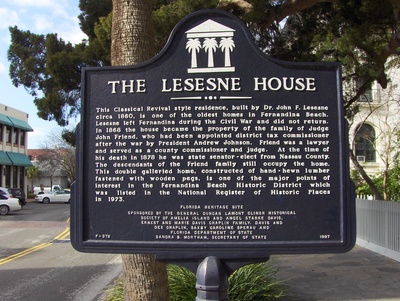 This marker is located on the corner of Center and 5th St in Nassua County in Fernandina Beach.

" This Classical Revival style residence, built by Dr. John F. Lesesne circa 1860, is one of the oldest homes in Fernandina Beach. Lesesne left Fernandina during the Civil War and did not return. In 1868 the house became the property of the family of Judge John Friend, who had been appointed district tax commissioner after the war by President Andrew Johnson. Friend was a lawyer and served as a county commissioner and judge. At the time of his death in 1878 he was state senator-elect from Nassau County. The descendants of the Friend family still occupy the home. This double galleried home, constructed of hand-hewn lumber fastened with wooden pegs, is one of the major points of interest in the Fernandina Beach Historic District which was listed in the National Register of Historic Places in 1973."