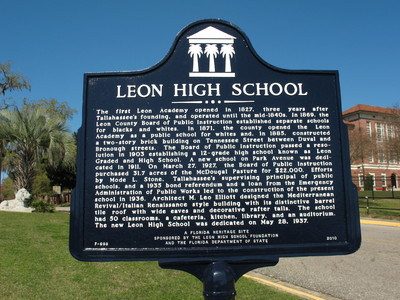 The text on the marker reads as : " The first Leon Academy opened in 1827, three years after Tallahassee´s founding, and operated until the mid-1840s. In 1869, the Leon County Board of Public Instruction established separate schools for whites and blacks. In 1871, the county opened the Leon Academy as a public school for whites and, in 1885, constructed a two-story brick building on Tennessee Street between Duval and Bronough streets. The Board of Public Instruction passed a resolution in 1903 establishing a 12-grade high school known as Leon Graded and High School. A new school was dedicated on Park Avenue in 1911. On March 27, 1927, the Board of Public Instruction purchased 31.7 acres of McDougal Pasture for $22,000. Efforts by Mode L. Stone, Tallahassee´s supervising principal of public schools, and a 1935 bond referendum and a loan from the Emergency Administration of Public Works led to the construction of the present school in 1936. Architect M. Leo Elliott designed the Mediterranean Revival/Italian Renaissance style building with its distinctive barrel tile roof with wide eaves and decorative rafter tails. The school had 50 classrooms, a cafeteria, kitchen, library and an auditorium. The new Leon High School was dedicated on May 28, 1937."