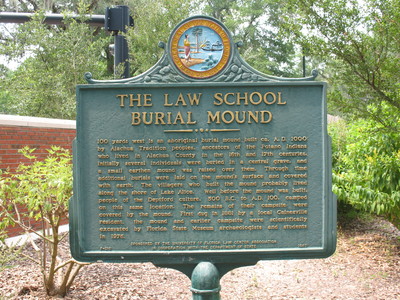 This historical marker is located In front of the University of Florida Law School.

" 100 yards west is an aboriginal burial mound built ca. A.D. 1000 by Alachua Tradition peoples, ancestors of the Potano Indians who lived in Alachua County in the 16th and 17th centuries. Initially several individuals were buried in a central grave, a small earthen mound was raised over them. Through time additional burials were laid on the mound's surface and covered with earth. The villagers who built the mound probably lived along the shore of Lake Alice. Well before the mound was built, people of the Deptford Culture, 500 B.C. to A.D. 100, camped on this same location. The remains of their campsite were covered by the mound. First dug in 1881 by a local Gainesville resident, the mound and earlier campsite were scientifically excavated by Florida State Museum archaeologists and students in 1976."

Sponsored or placed by: University of Florida Law Center Association in cooperation with the Department of State