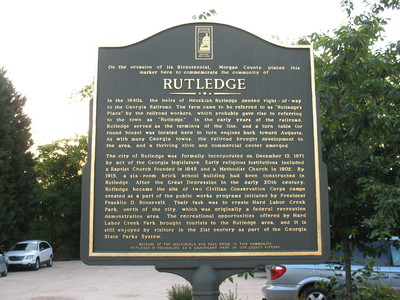 Town Marker, Rutledge, GA. This marker is located opposite City Hall in Rutledge, Morgan County, Georgia. The marker reads as :

On the occasion of its Bicentennial, Morgan County placed this marker here to commemorate the community of RUTLEDGE In the 1840s, the heirs of Hezekiah Rutledge deeded right-of-way to the Georgia Railroad. The farm came to be referred to as " Rutledge Place" by the railroad workers, which probably gave rise to referring to the town as "Rutledge." In the early years of the railroad, Rutledge served as the terminus of the line, and a turn table (or round house) was located here to turn engines back toward Augusta. As with many Georgia towns, the railroad brought development to the area, and a thriving civic and commercial center emerged. The city of Rutledge was formally incorporated on December 13, 1871 by act of the Georgia legislature. Early religious institutions included a Baptist Church founded in 1845 and a Methodist Church in 1902. By 1915, a six-room brick school building had been constructed in Rutledge. After the Great Depression in the early 20th century, Rutledge became the site of two Civilian Conservation Corps camps created as part of the public works program initiated by President Franklin D. Roosevelt. Their task was to create Hard Labor Creek Park, north of the city, which was originally a federal recreation demonstration area. The recreational opportunities offered by Hard Labor Creek Park brought tourists to the Rutledge area, and it is still enjoyed by visitors in the 21st century as part of the Georgia State Parks system. BECAUSE OF THE INDIVIDUALS WHO TAKE PRIDE IN THIS COMMUNITY, RUTLEDGE

IS RECOGNIZED AS A SIGNIFICANT PART OF OUR COUNTY HISTORY