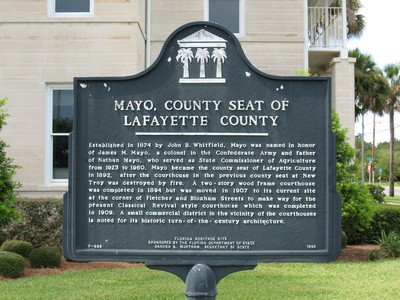 " Established in 1874 by John B. Whitfield, Mayo was named in honor of James M. Mayo, a colonel in the Confederate Army and father of Nathan Mayo, who served as State Commissioner of Agriculture from 1923 to 1960. Mayo became the County seat for Lafayette County in 1892, after the courthouse in the previous county seat at New Troy was destroyed by fire. A two story wood frame courthouse was completed in 1894 but was moved in 1907 to its current site at the corner of Fletcher and Bloxham Streets to make way for the present Classical Revival style courthouse which was completed in 1909. A small commercial district in the vicinity of the courthouses is noted for its historic turn -of -the-century architecture."