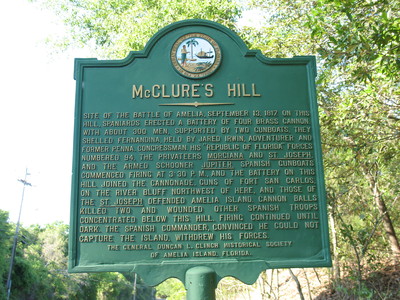 The McClure's Hill historical marker in Fernandina Beach designates the site of the Battle of Amelia on September 13, 1817, when the Northern adventurers routed the Spaniards who shelled old Fernandina (Old Town) from this hill.

The marker text reads as follows:

"Site of the Battle of Amelia, September 13, 1817. On this hill, Spaniards erected a battery of four brass cannon. With about 300 men, supported by two gunboats, they shelled Fernandina, held by Jared Irwin, adventurer and former Penna. Congressman. His "Republic of Florida" forces numbered 94, the privateers Morciana and St. Joseph, and the armed schooner Jupiter. Spanish gunboats commenced firing at 3:30 P.M., and the battery on this hill joined the cannonade. Guns of Fort San Carlos, on the river bluff northwest of here, and those of the St. Joseph defended Amelia Island. Cannon balls killed two and wounded other Spanish troops concentrated below this hill. Firing continued until dark. The Spanish commander, convinced he could not capture the island, withdrew his forces."