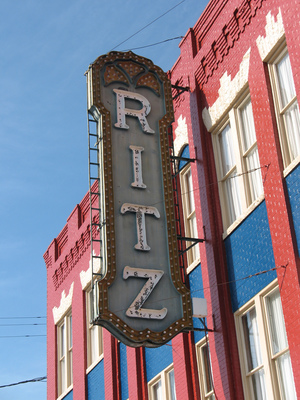 The Ritz Theatre, located within the "Old Town Brunswick" National Register Historic District, was built in 1898 to house the Grand Opera House, retail establishments, and the general offices of the Brunswick and Birmingham Railroad.

Originally, the Grand Opera House, a three-story Victorian building featuring ornate brick and stone work, was built for the legitimate stage. Later, it served as a theatre for vaudeville. In the 1930s, as motion pictures became the rage, the Opera House was converted into a movie palace. To give the building a more modern art deco look, the first-story brick work was covered with carrara glass, and an elaborate marquee and cascading sign were added. Thus, the Grand Opera House became the Ritz Theatre.