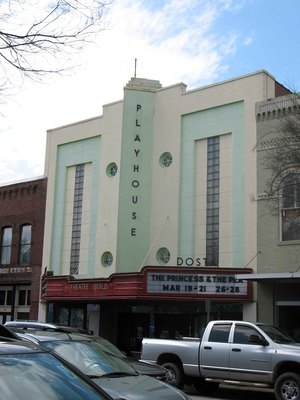 Dosta Theater opened in 1941, this was a small one-screen theatre in downtown Valdosta, Georgia. It is one of the two remaining theatres from the Martin Theatre chain that still stand in Valdosta.

Today the Dosta Theatre is known as the Dosta Playhouse and is home to Theatre Guild Valdosta (TGV), which is an all volunteer community theater group. The Guild purchased the building in the 90s and then later purchased adjoining buildings for much needed expansion.

The Guild produces 6 shows each year. Dinner is served at the four major shows on some nights. The acting troop is rapidly gaining popularity in the area and the old Dosta Theatre is once again a source of entertainment and community pride.