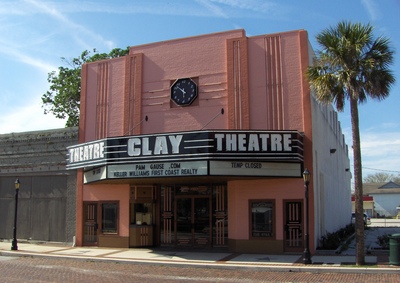 The twin-screen, two-story theater sits just a block up from the St. Johns River and neighboring city park and spring. The Clay Theater opened in 1919 as the Palace Opera House, and converted to movies in 1936. In recent years, the theater changed hands and an extensive remodel took place. It was a beautiful showplace. The original balcony was converted to another screen in the early-1990’s with 224 seats downstairs and 78 seats upstairs.

The Clay Theatre was closed in 2009. It was reopened in September 2012 and closed June 1, 2014. The nearly 100-year-old theater – owned by brothers John and Charlie Watzke, along with partner Chad Edwards – announced the closing of the theater.