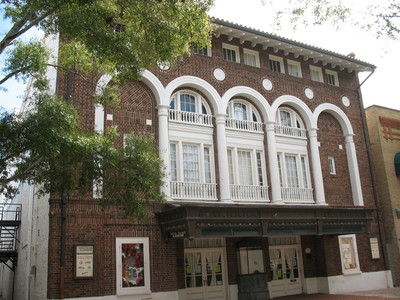 The Aladdin Theater (also known as The Historic Cocoa Village Playhouse) is an historic theater in Cocoa, Florida, United States. It is located at 300 Brevard Avenue and originally opened its doors on August 18, 1924. On October 17, 1991, it was added to the U.S. National Register of Historic Places.

Brevard Community College owned the theater from 1985 to 2010. In 2010 the college offered ownership to the city of Cocoa and renamed it the Cocoa Village Playhouse. Through donations, and grants, the building was restored from 1985 through 1989. In 1990, the playhouse began staging community based musicals. An established audience base of 4,000 season patrons support the Playhouse each year and performances often sell-out before the run of each production is finished. This thriving community theater has extended runs for almost every show to meet public demand since 1995. It is Known to all as “Broadway on Brevard”.