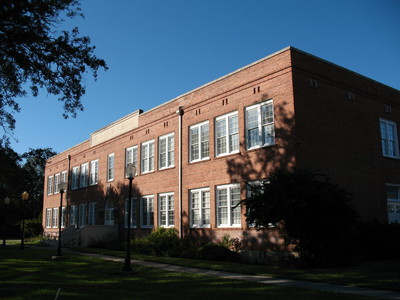 The school was built in 1927 as Nassau Colored School Number 1 and known as Peck High School, which served grades one through twelve. The school was constructed as part of the Rosenwald Schools program, which began in 1912 and ended in 1932. Peck High School was named after William Henderson Peck, one of the early principals and champions of African-American education in Fernandina Beach. W.H. Peck is among the Great Floridians of the state. The school was closed in 1969 after desegregation, and for many years was empty.

Significant deterioration led community activists to champion preservation of the building beginning in the early 1980’s. The Nassau County School Board transferred ownership of the site to the City of Fernandina Beach in 1989. Today the complex serves as an important community cornerstone and is home to City offices, non-profits, classes and activities, and recreation. In 2010, the Peck Center Complex was included in the City’s local historic district in order to protect the structure for future generations. The building serves as a significant component of the story of African-American heritage in Fernandina Beach.