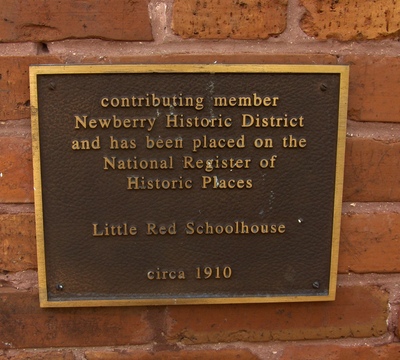 The Little Red School House (LRSH) was built c1910, and was used as a K-12 school until approximately 1930 when a two story school was built. The LRSH was used by the Alachua County School System until 1975 when Newberry Elementary School was built. This is the plaque on the wall of the school building.

Shortly after that, the City took ownership of the LRSH and kept it for restoration. The renovation of the LRSH took place due to the work of several civic groups, local businesses, and local citizens who worked diligently to raise funds. In 2002 local and state dignitaries were on hand to celebrate the official opening of one of Newberry’s most treasured city landmarks. It includes a museum established by members of the Friends of the Little Red School House.

Today the LRSH is used to house offices for the City of Newberry and is on the Historic Registry. This building is a source of pride for the Newberry Community and has many visitors to the school museum.