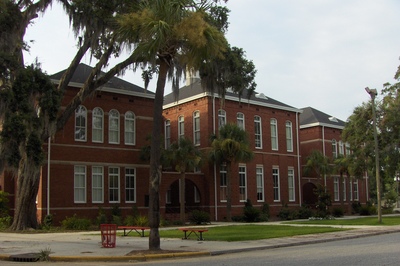 Commissioned by Glynn County’s school board and designed by Alfred S. Eichberg the Annex was built to replace the old 1838 wooden structure. The Annex Building was built in 1889.

Billed as three buildings in one, the Annex was celebrated for its innovative “Fire Proof” design consisting of solid brick walls between each of its distinct sections. It consisted of two outer buildings with four “recitation” rooms each (two upstairs and two downstairs) framing a center section originally configured with two large study rooms. The two center study rooms were designed to accommodate a combined total of 500 students. Replaced by the main Glynn Academy school building in 1923, the Annex lay virtually dormant until 1938 when (at a cost of $40,000) it was refurbished to ease student overcrowding.

On August 19, 2005, the Annex Building was severely damaged as the result of a lightning flash but has since been remodeled. The Annex Building is the only building with an elevator due to the age of many of the other buildings on campus. This building is home to our math department.