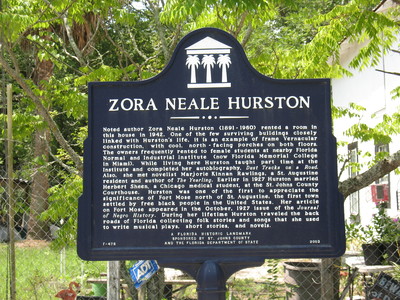 " Noted author Zora Neale Hurston (1891-1960) rented a room in this house in 1942. One of the few surviving buildings closely linked with Hurston´s life, it is an example of frame Vernacular construction, with cool, north-facing porches on both floors. The owners frequently rented to female students at nearby Florida Normal and Industrial Institute (now Florida Memorial College in Miami). While living here Hurston taught part time at the Institute and completed her autobiography, Dust Tracks on a Road. Also, she met novelist Marjorie Kinnan Rawlings, a St. Augustine resident and author of The Yearling. Earlier in 1927 Hurston married Herbert Sheen, a Chicago medical student, at the St. Johns County Courthouse. Hurston was one of the first to appreciate the significance of Fort Mose north of St. Augustine, the first town settled by free black people in the United States. Her article on Fort Mose appeared in the October, 1927 issue of the Journal of Negro History. During her lifetime Hurston traveled the back roads of Florida collecting folk stories and songs that she used to write musical plays, short stories, and novels."

Sponsors: St. Johns County and the Florida Department of State