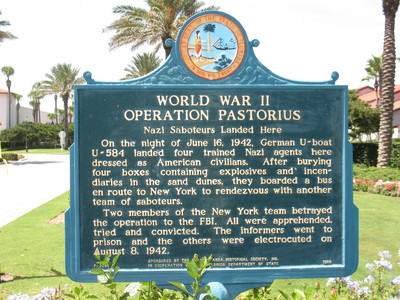 This marker is located in front of the Ponte Vedra Inn and Country Club on Ponte Vedra Blvd in one of Jacksonville's beach front areas.

The marker reads as : Side 1

" On the night of June 16, 1942, German U-boat U-584 landed four trained Nazi agents here dressed as American civilians. After burying four boxes containing explosives and incendiaries in the sand, they boarded a bus en route to New York to rendezvous with another team of saboteurs. Two members of the New York team betrayed the operation to the FBI. All were apprehended, tried and convicted. The informers went to prison and the others were electrocuted on August 8, 1942."

Sponsors: The Beaches Area Historical Society, Inc. in Cooperation with the Florida Department of State-1989